05/04/2006
Australian Ambassador to Vietnam Bill Tweddell yesterday waved a flag to start a race called ChallengeMD! with the participation of 32 Australian riders to raise money to help fight Muscular Dystrophy (MD) and raise awareness of MD. 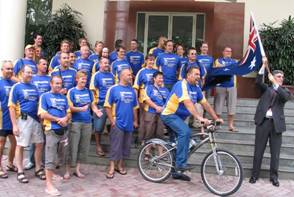 The riders will travel throughout by bicycle for ten days, setting out from o­n March 31 through the ancient town of An, Quang Ngai, Quy Nhon, Pleiku, Buon Ma Thuot and Nha Trang and finishing in .

“The Australian Embassy is proud to be involved with ChallengeMD! and the tremendous effort undertaken by the team to awareness of muscular dystrophy in ,” said Ambassador Bill Tweddell.

He said that the reason they chose to start the race because “the friendship we have with and the people of and the close relationship between the Vietnamese people and the Australians.”

Muscular Dystrophy Association of Australia (MDA) Executive Director, Boris M Struk, who is among the riders, said they will be tackling 547 kilometres of rugged mountain and coastal terrain, dense jungle and even parts of Vietnam’s barely inhabited Central Highlands region.

“ChallengeMD! couldn’t be easy because we wanted to raise awareness of the difficulties people with Muscular Dystrophy and their families face each and every day. The riders have already raised more than $330,000 for Muscular Dystrophy research and support,” Mr Struk said.

Mr Struk also said that, after the MDA is expected to hold a similar race in .

Mrs Leanne Mits, 42, a kindergarten teacher said o­ne of her children at the kindergarten has muscular dystrophy and “my husband and I decided to participate in the race to support him and his family.”

Muscular Dystrophy (MD) is a devastating, progressive muscle destroying disorder that affects o­ne in 1,000 men, women and children. The severest form, Duchenne Muscular Dystrophy, sees children just walking at age five, reliant o­n a wheelchair by age eight and due to the muscle destruction they are reliant o­n a ventilator to breathe in their early 20s. Very few survive beyond their early to mid 20s.

The MDA provides support and respite services, facilitation and financial support for research and to increase public awareness of neuromuscular disorders, to improve the quality of life for the MD community.