06/07/2021
On July 2-3, 2021, on behalf of the Embassy of Belgium in Hanoi and the Vietnam Women’s Union, the Women’s Union of Ha Tinh sent a donation of sustainable rice to 2.000 vulnerable women - informal workers in 11 communes in Ha Tinh province and Ha Tinh city affected by Covid-19 (05kg per person). 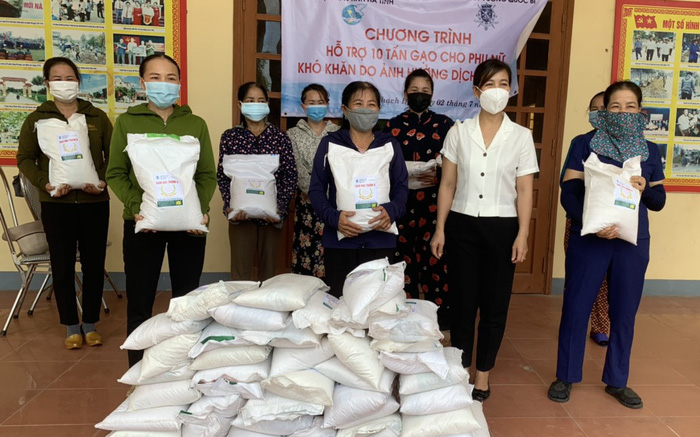 Since March 2020, Vietnam has experienced few epidemic outbreaks, which have negative impacts on its economy and society in general and especially on the lives of informal workers who lose their livelihoods and incomes. Therefore, the Embassy of Belgium decided to coordinate with the Vietnam Women's Union to support female workers in Ha Tinh province.

“COVID-19 pandemic caused many casualties over the world as well as heavy loss for Vietnam. During June last year, the Embassy of Belgium in Hanoi distributed sanitary packages to preschool children and families in Quang Nam, Quang Ngai and Kon Tum province. This time, we would like to support the vulnerable and informal female workers in Ha Tinh province in a hope that they can partly surpass their current difficulties”, Ambassador Paul Jansen said.

Over the last four decades, the Belgian Development Cooperation has supported Viet Nam in a number of areas: from infrastructure projects to poverty reduction and social development programs in the 1990s, then education, public health, water and sanitation. The last bilateral cooperation program of 58 million Euros focused on the areas of governance, water management and urban planning in the context of climate change and green growth. Ha Tinh province was a partner province during this last program. Those projects were successfully completed at the end of June 2019 and brought many positive changes in the project areas of Ha Tinh province.

The Vietnam Women’s Union (VWU) has been in a long-term partner with the Belgian Development Cooperation since the 1990s in a 15-year “Vietnam-Belgium micro-credit program”. Currently, VWU maintains a partner in different Belgium funded projects/programs in education implemented by international NGOs such as Plan International and VVOB.

The 10 tons of sustainable rice bags is coming from Binh Thanh cooperative in Dong Thap province supported by the Belgium funded project “Sustainable and inclusive rice in Vietnam” implemented by the NGO Rikolto. This project enables smallholder farmers to take up their role in rural poverty alleviation and to contribute to feeding a growing world population in a sustainable way by mainstreaming inclusive business models and practices for sustainable rice. Participating farmers have been convinced of its economic and environmental benefits, e.g. reduced input costs, decreased agrochemical application and a more diversified ecosystem.