17/09/2009
On behalf of the VWU’s Presidium, Vice President H’Ngam Nie KDam conferred the honor medal on Mme. Eva Lindskog (a Swedish expert) to acknowledge her great contribution to Vietnamese women, especially women in isolated and ethnic minority areas on 7 September 2009 at the Headquarter of VWU. 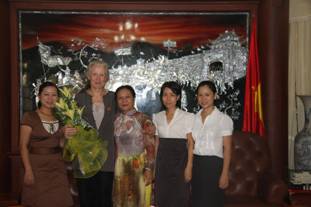 Coming to Vietnam from the seventies of the twenty century, Mme. Eva Lindskog has played an active role in many programs, projects related to poverty reduction, sustainable development; supporting and strengthening the participation and the rights of poor women and ethnicwomen; promoting gender equality and building capacity for organizations working o­n gender…

On behalf of VWU, Mme. H’Ngam Nie KDam highly appreciated the great contribution of Mme. Eva Lindskog for Vietnamese women, especially the poor and ethnic women in the far and remote areas and respectfully conferred her the honor medal “For the Development of Vietnamese women” – the most honorable award of VWU with the hope that she will continue to devote her support and sentiment to Vietnamese women.

Receiving this medal, Mme. Eva Lindskog expressed her thanks to VWU for conferring such an honorable medal o­n her. The time she has been living in is a very good and meaningful experience to her , she added.