21/12/2012
On the morning of November 7th, 2012 in Buon Ma Thuot, the Dak Lak Women's Union held a ceremony to sign a cooperation agreement with the Women’s Unions of four southern provinces in Laos (Champasack, Salavan, Sekong and Attapeu) and the provincial Mondulkiri Department of Women’s Affairs of Cambodia. The ceremony took place in the presence of Mr. Hoang Trong Hai, Standing Deputy Secretary of the provincial Party Committee and the leaders of the People's Council, the Fatherland Front, and other agencies in the province. Representing Laos and Cambodia, 25 delegates visited and worked in the province, and attended the signing ceremony. 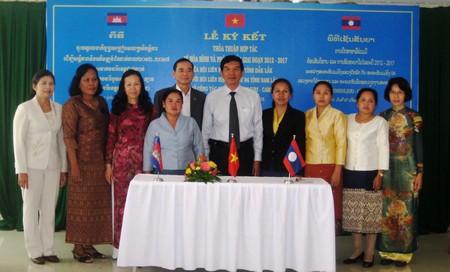 Dak Lak province shares 73 km of the border with Mondulkiri, a province of Cambodia. The two provinces have agreed to build a border of peace, stability, and development, and have advanced distinction and demarcation at some points. Over time, the two provinces have engaged in many activities, such as the exchanging of visits, building partnerships, ensuring border security, promoting economic development, etc. The four southern provinces of Laos share no common border with Dak Lak, however, they have agreed to many economic development projects, such as a project to plant ten thousand hectares of rubber, coffee, and cashew trees in the provinces of Laos, thereby creating jobs for thousands of workers and contributing to sustainable development for the common good.

In line with the partnerships mentioned above, realizing the orientations of the VWU o­n the implementation of the cooperation agreements that the VWU signed with the Lao Women's Unions and the Cambodian Women for Peace and Development,the Dak Lak Provincial Women's Union has actively made recommendations to the provincial authorities and increased communication with Laos and Cambodia, preparing the first efforts to organize the exchange.

The Cooperation Agreement for Peace and Development through the 2012-2017 period, signed between the Dak Lak Women's Union, the Women’s Unions of four southern provinces in Laos, and the Mondulkiri Department of Women’s Affairs of Cambodia, addressed the following content: 1) To contribute to the implementation of the agreements between the Central WUs and memorandums of the provincial authorities of the two parties; 2) To increase the exchange of information about policy directions, cooperation between the two countries and the situation of women in both parties, and to increase communication against social issues (gambling, drug abuse, domestic violence, trafficking in women and children, etc.); 3) In regards to instances of women and children being trafficked or having illegally migrated, to coordinate with relevant agencies to report and support them for repatriation; and 4) To increase the share of knowledge and experiencesof the women’s unions, and to carry out exchanges.

This ceremony represents a practical response of the Dak Lak Women’s Union in celebrating the Year of Solidarity between Vietnam and Laos and Vietnam and Cambodia, which contributes to increasing solidarity and cooperation among women in Laos, Cambodia, and Vietnam to achieve a new development milestone.

Mrs. Nguyen Thi Hoai Linh, Head of the International Relations Department of the VWU, attended the signing ceremony. The VWU appreciates the initiative and efforts of the Dak Lak Women's Union and looks forward to the effective implementation of the new cooperation agreement. Through the effective implementation of this agreement, the WU strives to become a model highlighting the role of women acute in the people-to-people relations.

The signing ceremony was held successfully in unity and with joy and enthusiasm from the participants of Vietnam, Laos, and Cambodia.

During the afternoon and evening of November 7th, 2012, the delegates of Laos and Cambodia visited the "Women of the 21st Century" club, held by the women’s chapter in hamlet 4 of the Eatu commune in Buon Ma Thuot city. They also visited the Dak Lak Museum and attended the reception and cultural exchanges of the Dak Lak Women's Union. o­n November 8th, the delegates visited the Vinpearl resort in Nha Trang City.