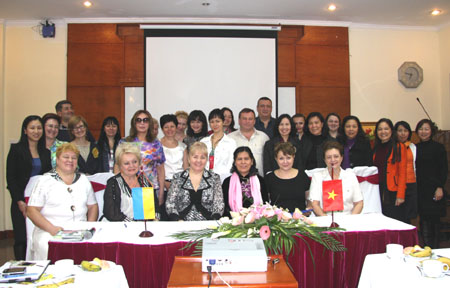 After visiting the Vietnam Women's Museum, the delegation had a working session with leaders of VWU at the Center for Women and Development - 20 Thuy Khue - .

On behalf of VWU, Mme. Nguyen Thi Kim Thuy warmly welcomed the delegation; confirmed the solidarity and friendship between the two countries’ people, especially between Ukrainian and Vietnamese women; appreciated Ukrainian people’s support and assistance to Vietnamese people in the cause of the struggle for the national independence.

Mme. Gheraximenco Leokadia expressed her delight when visiting and VWU, and thanked VWU’s leaders for their warm welcoming. She stressed that the friendship between Ukrainian and Vietnamese women would be forever maintained and developed; praised the role of Vietnamese women in the national construction and development.