Nurturing the traditional relationship of Vietnamese and Cuban women

25/06/2021
On June 22nd 2021, Member of the Vietnam Party Central Committee, VWU President Ha Thi Nga met with the Cuban Ambassador Mr. Orlando Nicolas Hernandez Guillen, who has just begun his post in Vietnam. Alongside with the Vietnam – Cuba ties, the women of the two countries always give each other the most sincere sentiments and support, Mrs. Nga said. 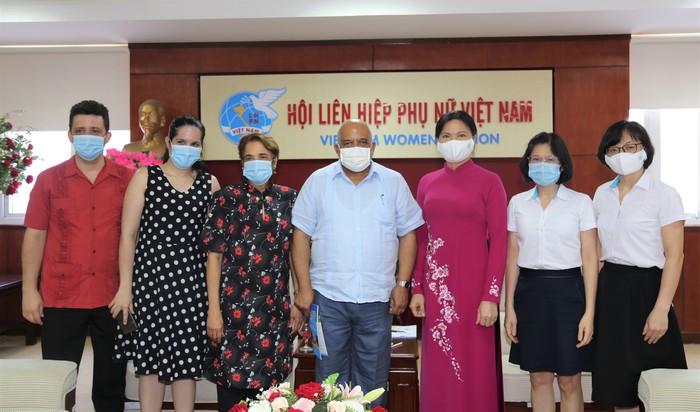 At the meeting, Mrs. Ha Thi Nga updated the Ambassador of the Vietnamese women’s development. The percentage of female National Assembly deputies in this term is 30.26% and the proportion of deputies of the People's Councils at all levels is also higher than in the previous term (provincial level: 29%; district level: 29.08%; commune level: 28.98%). Mrs. Ha Thi Nga also introduced the VWU’s major activities in 2021 with the theme "Focus on building a strong  organization, actively participating in building the Party and government". Particularly, the VWU is actively preparing for Women's Congresses at all levels towards the 13th National Women's Congress, scheduled in March 2022.

Mrs. Ha Thi Nga congratulated the Ambassador on the success of the 8th Congress of the Communist Party of Cuba and the achievements achieved under the Party’s leadership. To that success, the Cuban women have played great contribution. The Vietnamese women always respect and admire Cuban women for their high representation in all fields, especially in science and technology.

VWU President expressed her sincere thanks to the leaders of the Cuban Party, State and people for having helped Vietnam with medicines and doctors to fight the COVID-19 epidemic despite Cuba’s numerous challenges of its own. The two countries are now discussing the possibility of cooperation in the production of vaccines against COVID-19.

According to the Cuban Ambassador, Cuba currently has 5 candidates for Covid-19 vaccine and Abdala is the most effective (92.28% after 3 injections). To date, 4 million Cubans have been vaccinated against Covid-19 with at least one injection.

At the meeting, the Cuban Ambassador also shared about the damages endured by Cuba due to the US economic embargoes, especially in the Covid-19 context. On June 23, Cuba would submit to the United Nations a draft Resolution to demand the end of the US economic blockade on Cuba.

The VWU President expressed her high sympathy and sharings with the Cuban fraternal country. The Vietnamese women always stand with the Cuban people and women and support the request on US removal of the embargo. In the past, the VWU has always supported Cuba and Cuban women in the international arena, and highly praised at international forums, especially at the United Nations the Cuban achievements of human development, gender equality, and women’s and children's rights.

The VWU President also expresses sincere thanks for the Cuban Embassy’s support in connecting VWU and the Cuban Women’s Federation (FMC). In October 2020, the VWU and the Embassy jointly organized celebration of the 60th anniversary of Vietnam - Cuba women's relations and 60th FMC Anniversary. In 2018, thanks to the Cuban Embassy’s connection, the two Women’s Unions signed a cooperation agreement for a five-year period (2018-2022). The two sides also collaborated in 2020 to produce a documentary film about the relations of the Vietnamese - Cuba Women in Vietnamese and Spanish languages. In the near future, the VWU and the Vietnamese women are committed to further promote exchanges and cooperation with the FMC and the Cuban Women, contributing to the traditional friendship between two countries.