Promoting cooperation between women of Vietnam and South Africa

06/07/2021
That was one of the important contents of the meeting between Member of the Party Central Committee, VWU President Ha Thi Nga and Ambassador of South Africa to Vietnam Mr. Mpetjane Kgaogelo Lekgoro on June 22 in Hanoi. 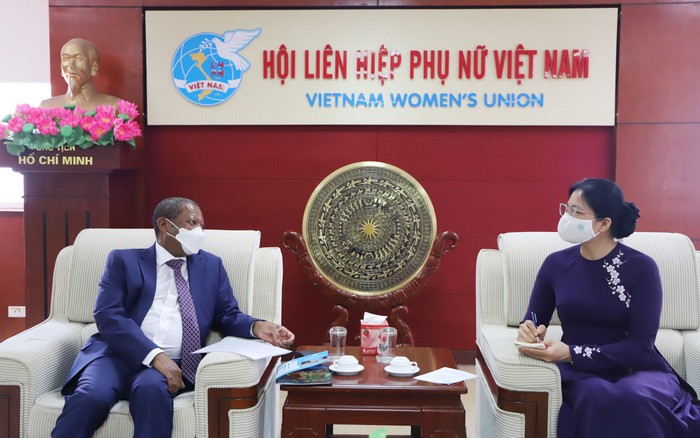 At the meeting, the Ambassador of South Africa said that he read a lot of documents and was extremely impressed with the role of Vietnamese women and the Vietnam Women’s Union in Vietnam‘s history, especially the current campaign “Building the family of 5 Without-s and 3 Clean-s” and its activities to support women in economic development. He was also surprised at VWU’s 19 million members and wished to learn the VWU’s experience in attracting and managing such a big amount of members.

In addition, Mr. Mpetjane Kgaogelo Lekgoro shared about the African National Congress Women's League (ANCWL) and expressed the commitment that the South African Embassy in Vietnam will connect women’s organizations of the two countries for exchanges, experiences sharing and further cooperation on women’s issues in the future. At the same time, the Ambassador also shared about the South African Women's Day on August 9 and hope to work with the VWU to celebrate the Day in the coming time.

The VWU President Mrs. Ha Thi Nga expressed her sincere thanks for the Ambassador’s good impression and sentiments for Vietnamese women and the VWU. She shared about the Vietnamese women’s status, particularly the success of the recent elections of deputies to the 15th National Assembly and People's Councils at all levels for the 2021-2026 term with an encouraging ratio of elected female deputies. It’s for the second time in Vietnam’s history, the ratio of elected women deputies to the National Assembly has reached over 30% (30,26%). The ratios of female People's Councils deputies at all levels are higher than the previous term (29% at provincial level; 29.08% at district level; 28.98% at commune level). These figures clearly show Vietnam's efforts in promoting gender equality, and affirm the advancement and increasing role of Vietnamese women in all fields, especially in politics. And the VWU at all levels has made contribution to this achievement through actively discovering, training and nominating female candidates for the elections.

In the area of peace keeping, Vietnamese women are very active, too. Recently, in March 2021, Vietnam sent off the staff of the third Level-2 Field Hospital that participating in the UN peacekeeping mission in South Sudan, including 12 female officers.

Mrs. Ha Thi Nga also shared with the Ambassador about the key activities of the VWU in 2021 especially the preparation for the Women's Union Congress at all levels towards the 13th National Women's Congress, scheduled in March 2022.

Sharing the VWU’s experience in attracting and retaining its members, Mrs. Ha Thi Nga said that the VWU has a nationwide network composing of 4 levels (central, provincial, district and communal) with its grassroot women’s groups and affiliates including Women’s Association of the Ministry of the Public Security, Women’s Affairs Unit of the Army, the Association for Intellectual Women and the Association of Women's Entrepreneurs. Therefore, the activities and movements of the VWU are systematically and closely implemented. The National Women‘s Congress is convened every 5 years to evaluate the results of the women’s movements and activities in the past term and develop directions, goals and tasks for the new term. VWU President especially highly appreciated the attention and support of the Party and State for the VWU’s activities at all levels.

Regarding member attraction and retention, the most important thing is to inform women about the benefits of being a VWU member, such as involving in the organization’s activities; being provided knowledge and skills on mothering, nurturing a happy family; developing household economy; having opportunities to get loans with preferential rates; being informed the lines and orientation of the Party, the policies and laws of the State on different fields, etc.