20/03/2020
On February 21, the Party Central Committee Member and VWU President Nguyen Thi Thu Ha had a meeting with Korean Ambassador to Vietnam Park Noh Wan to discuss cooperation activities to support Vietnamese brides in Korea and those who have returned to Vietnam. 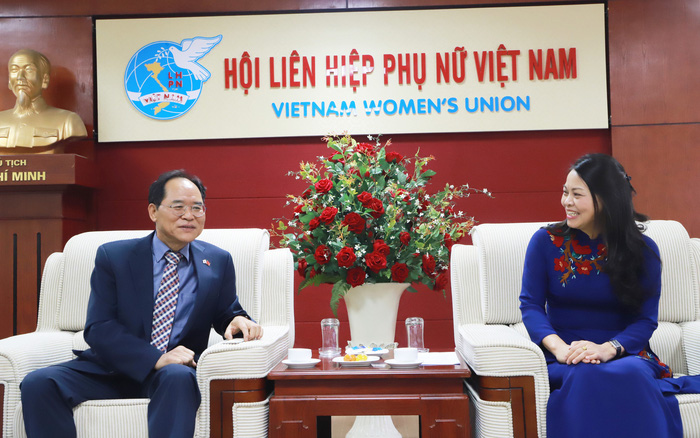 At the meeting, VWU President Nguyen Thi Thu Ha briefed cooperation activities between the VWU and Korean partners including training courses support for women businesses, and capacity building of female human resources. Since 2013, the VWU and the Korean Women's Development Institute (KWDI) have organized 7 Vietnam-Korea Women's Forums in a rotating manner to share gender mainstreaming and women development best practices. The VWU also cooperates with the Ministry of Gender Equality and Family (MOGEF) in various activities related to women empowerment and healthy international marriage.

In 2019, the Korea International Cooperation Agency (KOICA) funded the project “Strengthening Vietnamese Capacity for Sustainable Reintegration of Returning Women Migrants and Their Households in Vietnam”. In August 2019, KOICA Vietnam, the VWU and the International Organization for Migration (IOM) signed a Record of Discussions (ROD) of this project. This will be an important support for the reintegration of Vietnamese returning women migrants.

As such she proposed the Korean Embassy and Government continue to cooperate and support the VWU in such activities as the Vietnam-Korea Women's Forum, KOICA-IOM project, and VWU digitalization, as this is where Korea has lots of expertise.

Ambassador Park Noh Wan, said, there are about 140,000 Vietnamese people living in Korea, including 60,000 multicultural families. Besides, there are about 3,000 Vietnamese-Korean families and 9,000 Korean businesspersons in Vietnam. Acknowledging the VWU proposals, the Korean Embassy will enhance cooperation and support for Vietnamese women, especially returnees and their children.

Ambassador Park Noh Wan emphasized that the Korean side will cooperate with the VWU in providing free legal support, psychological counseling, and vocational training for women returnees in the Mekong Delta region. They can also introduce jobs in Korean businesses, which help the women overcome economic difficulties. In addition, returning Vietnamese-Korean children will be able to take part in Korean language classes.