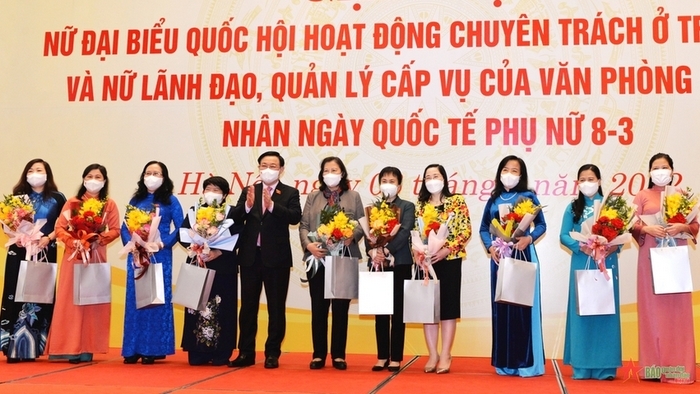 Reviewing major legislative activities since the elections of the 15th National Assembly and all-level People’s Councils for 2021-2026, Hue hailed contributions of female deputies as well as the performance of the NA Office’s female managers.

He emphasised policies and attention of the Party, State and legislature towards female officials in the political system, from central to grassroots levels, in order to boost women’s engagement in all sectors.

Over the past tenures, the number of female deputies in Vietnam has been higher as compared with other countries in the region and the world, and it is on the rise, from 132 (26.88 percent) in the 14th term to 151 (30.26 percent) in the 15th tenure.

Many of them have held key positions in Party and State agencies, the top legislator noted, lauding the operations of the group of female NA deputies, which offers a forum for its members to exchange professional experience.

He urged the female deputies and officials to improve their knowledge and play a more active role in the building and enforcement of laws and policies on gender equality and women’s progress.

On this occasion, NA leader Hue asked NA agencies to review and supervise the implementation of support policies, including those targeting women and children affected by the COVID-19 pandemic.

The agencies were also urged to give consultations to the NA and its Standing Committee on policies towards female workers at industrial parks, especially policies on housing and schools.

The Chairman stressed the need to include women in personnel planning schemes for the 16th legislature, as well as the NA Office and agencies, affirming that the NA Standing Committee will create more optimal conditions for female deputies and officials to fulfil their tasks.