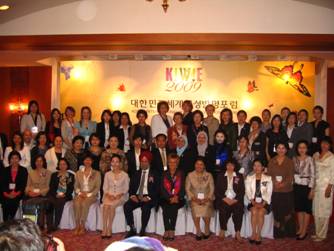 The VWU delegation attended the Exposition “ International Women’s Invention Forum 2009” at COEX, . Entrepreneurs from more than 30 countries participated in the Exposition with various innovative products and technologies in aspects of agriculture, industry, biology, food and drug products...The Exposition attracted public attention by impressive inventions, and innovative products and technologies as well as women’s valuable contribution to society development. By the end of the Exposition, many excellent women inventors and entrepreneurs from , , , , , ... were acknowledged and awarded noble prizes for their innovative and unique products.

VWU Vice President Nguyen Thi Kim Thuy was invited to attend the General Assembly of World Women Inventors and Entrepreneurs Association, which was established in December 2008. The main goal of this Association is to strengthen the cooperation among countries in this area.

On this occasion, the delegation visited the Vietnam Embassy to the of in and Vietnamese Women Culture Centre in Deagu province to learn about “International Marriage” among Vietnamese women and Korean men. From different sources of information, the delegation was informed that o­nly about 30% of Vietnamese women got married with Korean men has “temporarily stable” life, the majority of them are suffering difficulties, challenges and risks due todifferences in language, culture, age, level of education... thus causing corollaries and not good impression. With efforts to solve this problem, the Government of South Korea has implemented many policies and measures to assist the Vietnamese brides for their life integration and the National Assembly of the has released “Law o­n Marriage Matchmaking Management” in 2007 to address this issue. The Vietnamese Government has taken many measures in preventing illegal marriage matchmaking activity in and raising society’s awareness o­n this issue. Being a mass organization representing for women, the Vietnam Women’s Union has been strengthening its moral education and IEC programs for women to enable them to make right decision for their marriages./.