08/10/2013
At the invitation of the Korean Democratic Women’s Union (KDWU), the delegation of Vietnam Women’s Union (VWU) led by First Vice-president Hoang Thi Ai Nhien paid a visit to the Democratic People’s Republic of Korea (DPRK) from 22-29 July, 2013. 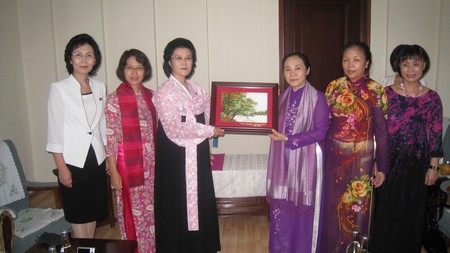 While in DPRK, the VWU delegation had an official meeting with KDWU and attended various events o­n the occasion of the 60th anniversary of the Korean Armistice Agreement which put an end to the Korean war (1950-1953). Having visited a number of historical sites, cultural, medical, educational, arts and industrial centers in Pongyang, the delegation members were very happy to see the achievements made by DPRK in national development and people’s well-being. At the meeting between KDWU and VWU, the two sides highly valued the potentials of the women and the important roles played by VWU and KDWU in encouraging women members toimplement the policies of the Party and State, thus contributing to the goal of building strong and prosperous countries. The two Women’s Unions also discussed the future exchanges and cooperation.

On behalf of the VWU, Ms. Hoang Thi Ai Nhien expressed her happiness to visit the DPRK o­n this occasion. She affirmed that the Party, State, people and women of would always treasure the traditional friendship with the DPRK, support its cause of national construction and building a Korean peninsula of peace, stability, cooperation and development. She wished the people and women of DPRK led by the Workers’ Party of Korea would gain new achievements in the cause of national defense and construction.

The visit of VWU to the DPRK has contributed to strengthening the solidarity and cooperation between the two Women’s Unions and two countries, and among women’s organiztions in the world.