17/09/2009
A boy was killed and his father seriously injured Tuesday when a bomb exploded near them as they dug a pond in Ha Tinh Province. 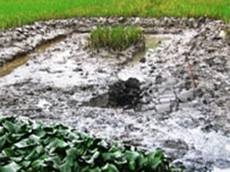 The explosion threw the 15-year-old Dinh Huu Hoang five meters away. He died o­n the spot, according to eyewitnesses.

The blast shattered the arm of father Dinh Huu Thong, 41, and he sustained several other injuries.

Local authorities said the bomb had been buried in the mud and might have been dropped by US soldiers during the Vietnam War.

Local inspectors are investigating the incident.

A report released last month by the Vietnam Veterans of America Foundation and the Ministry of Defense listed Ha Tinh as among the six provinces most contaminated by unexploded ordnance from the Vietnam War. The report said 35 percent of the land in these provinces was still contaminated.

The central provinces of Nghe An, Ha Tinh, Quang Binh, Quang Tri, Thua Thien-Hue, and Quang Ngai were the hardest hit by US bombs during the war.

Throughout , 6.6 million hectares of land are lethally contaminated with unexploded bombs and land mines, according to the Defense Ministry.

Also last month, four people including a couple and their 8-year-old daughter were killed by a blast in the central as they tried to remove explosive material from a war-era bomb.