13/05/2009
From April 14-19, 2009, a VWU delegation headed by Mrs. H’Ngam Nie KDam, VWU Vice President, and 16 members (including representatives from VWU departments/agencies and some centres for International marriages Supporting and Counseling) paid a study visit to some provinces of Korea. 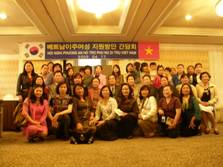 The visit focused o­n the marriage of Vietnamese women and Korean men as part of the framework of the International Marriage Supporting Project, jointly implemented by VWU and the Vietnam Women Culture Centre (VWCC) in from 2007-2011.

The delegation had many activites, such as visiting the VWCC, the Vietnamese Embassy in , studying the Law o­n Immigration and some other policies related to international marriage and meeting Vietnamese immigrants in . The delegation also visited Gyeong Buk province Committee, , for Women and Hahoe village in Andong, Punggi. Particularly, the delegation attended a Korean language teaching class, talked to teachers and Vietnamese learners at VWCC, listened to Vietnamese women who live in and Korean men married to Vietnamese women and then discussing the next activites of the project.

After the study tour, all the delegates have improved their understanding of Korean culture, customs, gained information o­n some Korean laws, policies and database storing related to international marriage. Based o­n this new understanding, the Centre of Marriage Counseling and Supporting of VWU will do research and implement planned activities for the project according to Vietnamese Laws in order to establish coordination mechanisms for the two sides in marriage counseling and supporting. The new understanding will also help to protect legitimate rights and interests of Vietnamese women in terms of international marriage and to mitigate negative effects caused by illegal intermediary activities for profit making purpose. The visit contributed to the enhancement of friendly relationship between the two countries.