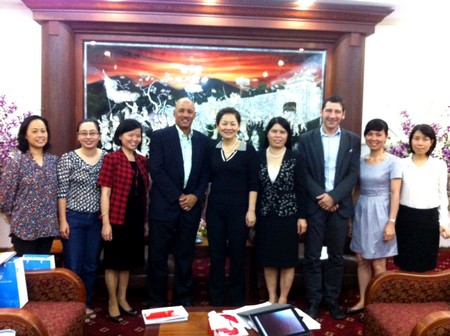 On behalf of the Vietnam Women’sUnion,Ms.Tran Thi Huong warmly welcomed Mr. Mark T. Pierce to the VWU and thanked Plan International in general and Plan in Vietnam in particular for their support for VWU’s activities, especially in the field of family and children affairs over the past years.

Ms.Nguyen Thi Tuyet Mai, member of the Presidium, Head of the Family & Social Affairs Department of the VWU introduced the activities being implemented by the VWU in the framework of the Parenting Program signed between Plan in Vietnam and the VWU in January 2013, the results of these activities as well as the difficulties and challenges facing their implementation.

Speaking at the meeting, Mr. Mark T. Pierce highly appreciated the VWU roles in caring for and protecting the rights and interests of women and children, especially girls, as well as the capacity of VWU’s staff in the implementation of the programs. He expressed his interest in women’s lives in the northern mountainous provinces and the VWU’s activities to prevent trafficking in women and children in these localities. He hoped that in the near future, Plan in Vietnam and the VWU will strengthen the cooperation relationship to strive for the development of women and children in Vietnam.