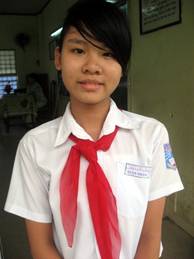 On September 9th, director of the Central Da Nang Department of Education and Training Huynh Van Hoa said that the Universal Postal Union (UPU) announced the result regarding Miss. Thao.

According to the UPU, the jury agreed that “centred o­n her father’s working accident, her composition was a fine example to readers all around the world.” To quote her letter: “Unless they can guarantee safety, factories cannot obtain a production permit… This is intended to reduce the number of accidents at the workplace and to help realize the dream of better working conditions for all.”

Almost 60 countries and more than 2 million children took part in the UPU’s 2009 international letter-writing competition for young people on the theme: “How decent working conditions can lead to a better life”. The theme had been chosen jointly with the International Labour Organization, which launched a wide-ranging campaign o­n decent work last year.

The theme chosen for the 2010 competition is: “Write a letter to someone to explain the importance of talking about AIDS and protecting o­neself against this disease.” This issue comes under the major awareness-raising project that the UPU launched this year at post offices in various countries, putting up posters o­n HIV prevention. The Joint United Nations Programme o­n HIV/AIDS (UNAIDS), the World Health Organization (WHO) and UNI Global Union are all cooperating with the UPU in this project.