VIFW chairwoman awarded the Order of the Star of Italy

15/04/2021
HCM CITY — Lê Thị Quỳnh Trang, Chairwoman of Việt Nam International Fashion Week (VIFW) and President of Council of ASEAN Fashion Designers, yesterday was awarded the Knight of the Order of the Star of Italy. 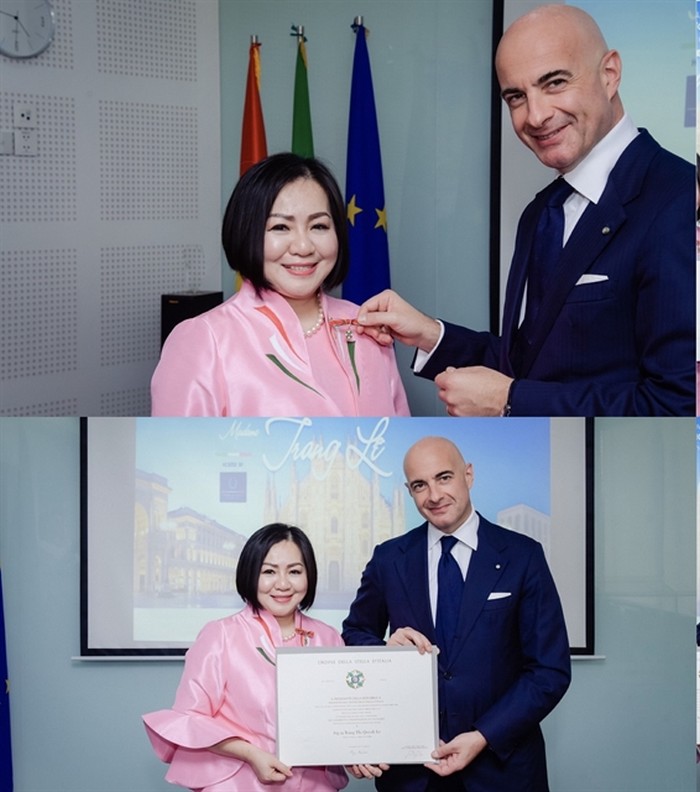 Consul General of Italy in HCM City Dante Brandi Knight awards the Order of the Star of Italy to VIFW Chairwoman Lê Thị Quỳnh Trang. — Photo courtesy of the organiser

The Order of the Star of Italy was established in 2011 and is awarded to Italians abroad or foreigners who have acquired special merit in the promotion of friendly relations and cooperation between Italy and other countries and the promotions of ties with Italy.

On behalf of the President of the Republic of Italy Sergio Mattarella, Consul General of Italy in HCM City Dante Brandi gave Trang an award in recognition of her contribution to promoting and consolidating the reputation of Italy in Việt Nam, in the fields of creativity, training, marketing, craftsmanship, fashion and culture.

Brandi said at the ceremony: “Trang has constantly inspired her initiatives to the excellence of Italian fashion, taking Italy as an inspiration and reference model for the development of the sector in Việt Nam.”

“The numerous Italian stylists and economic operators at the initiatives organised by Trang have contributed to the development of fruitful relations between the two countries, not only in an economic nature but also in academic and cultural fields,” he added.

Trang expressed her gratitude to the recognition of the Italian Government, emphasising that the award “is a great honour to me as well as to the Việt Nam fashion industry”.

“The merit is not only a recognition for my efforts, but also my responsibility in elevating Việt Nam fashion to new heights. I believe Việtnamese and Italian relations will be promoted in several fields, particularly fashion,” Trang said.

In 2005, she founded the Multimedia Joint Stock Company, which has organised reality shows in fashion and modelling, such as Việt Nam’s Next Top Models and Project Runway.

In 2011, she established the first model management agency in Việt Nam, and has sent Vietnamese models to perform at internationally acclaimed fashion events in Milan, Paris, and Singapore.

Trang was founder and chairwoman of VIFW in 2014. The leading fashion event in the country has attracted numerous local and international designers and brands, especially Italian brands like Elisabetta Franchi, Maison Gattinoni, Retano Balestra, and Antinio Grimaldi.

In 2014, she was appointed Vietnamese representative at the Asia Couture Federation with mission of supporting and presenting the best Vietnamese people in fashion to join the federation.

In 2017, she was named in the Top 50 Most Influential Women list selected by Forbes Vietnam.

Trang has been President of CAFD, the first fashion association established by the ASEAN Secretariat, since September last year.  VNS