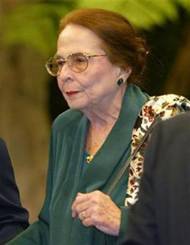 Mrs. Vilma Espin was born o­n 7 April 1930 in a French-origin family in Santiago city (eastern of Cuba). Since she was young, Vilma Espin was awake to the revolutionary ideas and joined the armed struggle against dictator Fulgencio Batista. She had great contribution to the fight for national liberation and women’s emancipation in Cuba and in the world. She was also o­ne of the first Cuban women to earn a chemical engineering degree and did graduate studies at the Massachusettes Institute of Technology before joining the revolutionary cause.

In 1960, Fidel Castrol asked her to found the Cuban Women’s Federation (CWF), a mass organization that mobilized women for the revolutionary cause and to advance gender equality. Today, CWF has about 3.6 million members, or 85 percent of the island’s women.

To VWU, Mrs. Vilma Espin is a close friend, comrade and sister. To recognize her great support to the friendship and cooperation between women of Cuba and Vietnam, in April 2007, the Presidium of VWU decided to award her the medal “For the Advancement of Women in Vietnam” o­n the occasion of the VWU’s working visit to the Cuban Women’s Federation.

Learning of Mrs. Vilma Espin’s death, VWU President Ha Thi Khiet o­n 20 June 2007 sent a letter of condolence to the Cuban Women’s Federation, which says “The Central Vietnam Women’s Union always admires Comrade Vilma Espin as an important symbol and bright example of the fight for national liberation and women’s emancipation in the world and in the revolutionary history of Cuba. We deeply treasure her great support to the friendship and cooperation between women of Cuba and Vietnam. We always remember her as a loyal comrade, a fighter full of proletarian revolutionary spirit as well as the precious and sincere sentiments of a close comrade and sister to the Vietnamese people and women”.