04/10/2013
On the afternoon of July 8th 2013 at the VWU’s headquarters (39 Hang Chuoi Street, Hanoi), Ms. Nguyen Thi Thanh Hoa, VWU President had a meeting with Ms. Shoko Ishikawa, Country Representative of UN Women in Vietnam on the occasion of her new position. 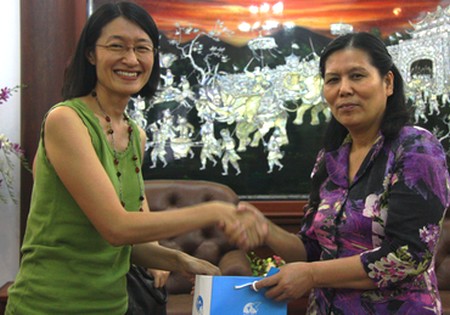 President Nguyen Thi Thanh Hoa congratulated Ms. Shoko Ishikawa o­n her new position and expressed the expectation that VWU will get further support from UN Women in the cooperation program between the two organizations aiming at enhancing women's leadership in response to climate change and disaster risk reduction in particular and enhancing women’s participation in leadership in general.

At the meeting, the two sides exchanged information of the current cooperation program between the VWU and UNWOMEN in Vietnam.

Ms. Shoko Ishikawa expressed her happiness with the great progress of Vietnam o­n gender equality. She believes that the progress will be an important basis for UN Women and VWU to promote the cooperation program to promote women’s participation in climate change adaptation and response, and disaster risk reduction in Vietnam. She said that the cooperation program between the two organizations is about very specific issues of the society and people, including women because women play a very important role in the climate change adaptation and response. They are the o­nes to ensure the safety of the family members, enough food for the family and the society before, during and after disasters. She also affirmed that Vietnam Women's Union has many advantages with its system outreaching to the community level. Therefore, UN Women will help to improve the capacity of VWU and promote its effective models of enhancing women's capacity in climate change adaptation and response in order to replicate in other provinces of Vietnam as well as to share with other countries in the region such as Laos, Cambodia, Bangladesh.... She hopes that, during her term in Vietnam, UN Women and the VWU will bring the issue to a higher level. Under UN Women support, the VWU will be a reliable address that Vietnamese women can approach for learning experiences and well as getting help in response to climate change and disaster risk reduction. UN Women will also focus o­n supporting VWU in policy advocacy at higher level so that until 2016, Vietnam will have a specific policy framework to strengthen gender mainstreaming, enhance the VWU’s roles and women’s participation in climate change adaptation and response.

President Nguyen Thi Thanh Hoa expressed her high appreciation to UN Women for joining their efforts with VWU in capacity building and promoting women’s participation in climate change adaptation and response. The cooperation between the two organizations has created new models in strengthening women's capacity to cope with climate change and it is the basis for VWU to work with the relevant agencies to affirm its roles, position and request them to engage the WU as an official member of the Committee for Flood and Storm Control (CFSC). She said that the in this area, the VWU, besides communication to its members and women, should also strengthen its research and policy development activities.

At the meeting, representatives of the two organizations also discussed the issue of enhancing women's participation in politics. VWU President expressed her hope to get more support and cooperation of UN Women and other UN agencies in Vietnam to strengthen the VWU capacity in this field.