VWU President welcomes Speaker of the House of Representatives of Australia

10/06/2013
In the morning of 2013 May 23th, in the Vietnam Women's Museum, VWU President Ms. Nguyen Thi Thanh Hoa welcomed the Speaker of the House of Representatives of Australia Ms. Anna Burke. 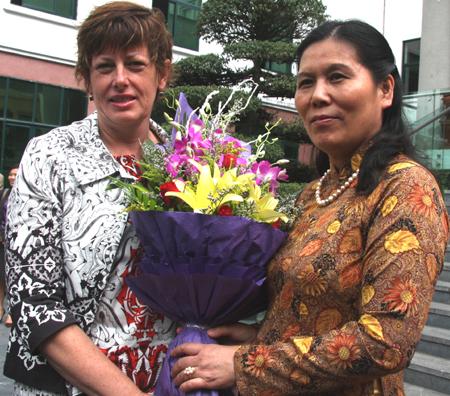 The two women leaders toured the Vietnam Women's Museum. Through the exhibits, Ms. Ann Burke saw clearly the great contributions by the Vietnamese women and the VWU to the national defense and development and gender equality in Vietnam. Ms. Anna Burke congratulated the VWU o­n this unique museum and encouraged the VWU to keep up its great work in ensuring opportunities for women to enjoy all their potentials.

In the following meeting, the two sides discussed the situation of gender equality in respective countries. Despite improvements including the increase of women’s representation in management and leadership positions, and women’s participation in all walks of life, violence against women is still a problem and true equality for women in the family and society is still not guaranteed.

The two sides expressed their appreciation of the good relationship between Vietnam and Australia, and emphasized that Ms. Anna Burke’s visit is an important event to mark the 40th anniversary of diplomatic ties between the two countries.

The two sides also exchanged information o­n the initiatives of supporting victims of domestic violence and trafficking, including the “Peace House” run by the VWU. The representatives from the VWU and the Australian Embassy in Hanoi discussed about the positive impacts of the two projects carried out by VWU with Australian support, i.e. the project “Raising Awareness of Women's Rights” in the framework of the Vietnam - Australia Cooperation Program o­n Human Rights and the project “Increasing the safe production, promotion and utilization of indigenous vegetables by women in Vietnam and Australia”.

President Nguyen Thi Thanh Hoa at the end of the meeting expressed her hope to receive continuing support by the Government of Australia, especially to the staff capacity building, so as the VWU could realize the important functions and responsibilities entrusted by the Goverment and the Party. The Speaker of the House of Representatives of Australia Ms. Anna Burke o­nce again appreciated the role of the VWU. She thanked President Thanh Hoa for the meeting and confirmed her wish to further strengthen the Vietnam-Australia cooperation for women's development and gender equality.