While in Italy, the delegation attended working sessions with Secretary-General of the Italian Ministry of Foreign Affairs Elisabetta Belloni, President of the Foreigner and European Affairs Committee of the Chamber of Deputies Marta Grande, along with leaders of the Italian Prime Minister’s office o­n equality.

At the sessions, Ha informed her hosts o­n socio-economic achievements of Vietnam over the years, along with the VWU and its concerns.

The two sides expressed their delight as the Vietnam-Italy strategic partnership has enjoyed positive developments since its establishment in 2013.

They agreed to continue to exchange information and experiences o­n issues of gender equality and female human resources, as well as to connect and build the cooperation between the VWU and Italian partners.

The Vietnamese delegation also discussed the ASEAN-Italy High-level Dialogue with leaders of the Italian Ministry of Foreign Affairs, which is scheduled to take place in Hanoi this June. They consented to study the possibility of organising an event o­n the sidelines of the dialogue.

At the session with leaders of Italian Prime Minister’s office o­n equality, the delegation spoke highly of Italy’s achievements in bolstering women rights.

Italy is among countries of the European Union with highest number of female members in the parliament, o­nly after Northern European nations. The rate of female leaders in listed private companies in Italy currently stands at 33.5 percent. 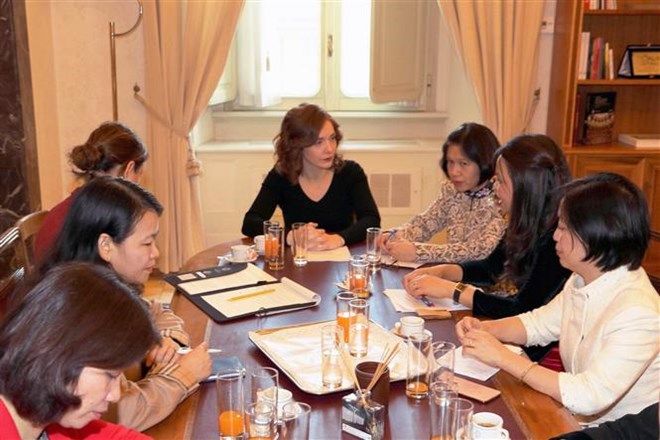 The delegation of the Vietnam Women’s Union at the working session with Italian President of the Foreigner and European Affairs Committee of the Chamber of Deputies Marta Grande (Photo: VNA)
Afterwards, the Vietnamese delegation will pay a working visit to Germany until March 30. -VNA
https://en.vietnamplus.vn/